skip to main | skip to sidebar

Job satisfaction has been one of the factors that research shows correlates with performance. It is not easy to measure as several factors influence one’s satisfaction with a job.

The author argues that in order for an organization to be successful a learning culture must be fostered; where everyone becomes interested in learning and improving their work knowledge.

I agree that a learning culture is the way to go, as things are currently changing. Innovations are being developed rapidly and the only way to survive is to continuously be learning. Once it’s apart of the culture it becomes natural and effortless. I especially like the fact that the article recommended two instruments I have not seen them yet but it should help in our quest to allow research to inform our practice and decisions

Posted by Julaine at 5:42 AM No comments:

Bridging the Gap between Theory and Practice 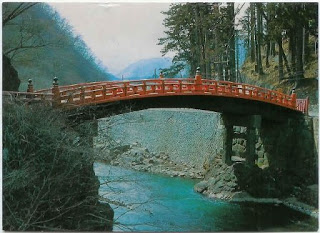 The divide between theory and practice seems to be a pervading issue with most new disciplines. Last semester one of my courses examined the foundation principles and theories of instructional technology, and the need for practice to be influenced by research was a recurring issue.

Where is all this coming from? You bet right!!!… I read the article by Harold Stolovitch: Human Performance Technology Research and Theory to practice.

This led me to go in search of some theories that were related to Human Performance. The link below is for an article titled, A Control Theory view of Human Performance, by Fred Nickols. The second link examines Nickols’ model and discusses how it may be applied. (towards the bottom of the page.)

Nickols breaks down control theory for us in simple terms and discusses how it can be used to improve performance.

There is a very Good diagram in the article (see below and the explanation was taken from the second link). 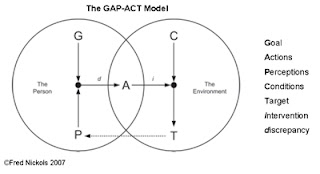 In the GAP-ACT Model, the current state of the target variable is defined by the performer’s perceptions of that target. Desired performance is reached because the performer:

Nickols’ makes a distinction between human behavior and human performance; behavior refers to the activity of the performer and performance refers to the effects or outcomes of that activity. He believes that the key to improving performance is by influencing behavior. The focus should not be on controlling behavior; instead effort should be placed on attaining the desirable outcomes. The essence of Nickols’ argument is that in trying to improve performance we have to bear the following in mind:

My father has a small business and each time he changes an office assistant (The person who handles the calls and paper work) he focuses on telling them exactly what to do to achieve his goals. However, in a lot of cases they failed to follow his instructions.

Based on this model, I think my father is trying to control the behavior of his workers instead of supporting them in achieving the target. Maybe if he had told them what his aims were and allowed them to decide how best to meet the goals maybe it would have been accomplished. However, he choose to give them a prescription

I see where some of the recommendations here would be helpful, especially the one that says we should get performers to commit to organizational goals (the article goes into details about how to do this). The perception issue is also important as our actions are based on our perceptions; so managers have to ensure that the performer’s perception actually reflects the current situation. I guess this would prevent the response that usually occurs after something goes wrong “but I thought this was the case……and that’s why I did that.”

This is another link from buisinessballs.com. I guess I got hyper carried a way (if I may coin my own term for moving from one hyperlink to the next :) ). This deals with the phases that people go through with regards to change. The link discusses two theories, which I outline below, and the second link is a PDF file illustrating the transition curve. The site elaborates on the first model but the second one makes better sense to me as some resolution seems to take place; the first one is just a bit confusing to me. What are your views?

The Lewis-Parker 'Transition Curve' seven stages are summarized as follows: 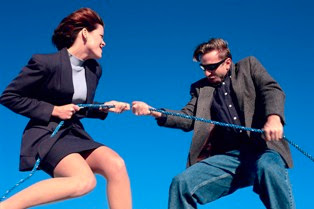 I started my search this week with change management as from experience this aspect is critical when implementing any new system or process. From my search I found two links very useful in giving an overview of change management and the issues related to change. I will gradually add more on change management but I decided to chunk and limit information to prevent brain overload :) .

Fortunately or unfortunately depending on which position you are in, human beings are complex beings with our own thought processes and value systems which guide our actions. Therefore, suggesting a change or ordering that change occurs does not in anyway determine that it will occur successful. One has to consider the people aspect.

The first link gives some very interesting stories to illustrate how people have reacted to change. The article emphasizes the need to pay attention to the culture of an organization when making changes. The author describes culture as, “that invisible and often complex system of beliefs and practices that determines how people act in organizations.” One of the recommendations that she made was to ensure that old standard operating procedures are replaced with new ones if the change is procedural.

The second link addresses the people aspect of change as well, in addition to giving an overview of change management. This website provides resources that may be helpful such as a decision making template. A salient point that was brought out was that change must not be imposed upon the people but rather they should be involved. The people who are involved should agree with the change or understand the change clearly. Below are some more pointers about the people aspect of change management: 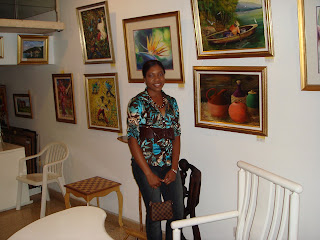 My name is Julaine Fowlin and I am from Jamaica. This blog was created in order to share my findings on advancements/ topics/ issues related to performance technology.

View my page on Education 2.0

Julaine
I am a graduate student at Southern Illinois University Edwardsville (SIUE). I am from the beautiful Island of Jamaica....... Ok enough of the formal verbiage, I am really a very hard to confine to one adjective or dimension person. I am open minded, not willing to be the vacuum of everything that is presented to be. I follow my dreams & see each challenge as an empowerment opportunity. I have a passion for teaching and learning, anything that involves communicating information, performance, motivation....you get the drift.

The purpose of this blog initially was to achieve a grade for a class with the intent that I will acquire a body of knowledge about Performance Improvement. It did work to an extent, but after awhile I was just doing it because I needed to pass my course. What made it worst was the fact that I had no committed audience. We were instructed to read our peers' blogs but I guess everybody was overwhelmed either they read and did not comment or they just could not be bothered to read (me included). Of course the instructor was a committed viewer, but this was not enough.

This highlights a very important aspect of learning; it is best when self initiated. This explains why organizations that facilitate informal learning excel above the rest. When people are naturally interested in a task or subject matter they are motivated to search for information. Thus, they empower themselves and by extension the company.

Now that my course has finished and I have subscribed to some really good blogs my self, I think I can continue to contribute to the knowledge sharing. I have garnered a lot from reading other blogs and have been motivated by the fact that some creators actually respond to the comments of others.

I decided to wear the shoe of “blog reader” before I wore the shoe of “blog creator”. One of the turn offs for me is when I visit a blog and see that the last post was a very long time ago, it means that the creator is no longer interested, so why should I the reader be bothered to even read the old post, that information can surely be found some where else. However, when the posts are current and engaging I want to visit, not only visit but subscribe.

Being a graduate student, having 2 years full time employment and 2 and 1/2 years internship experience, it is my intention to share my thoughts and knowledge that I have garnered and also to learn from others.

So Journey with me!